Pickleball Canada is pleased that Mark Renneson has joined TPA to lead this initiative under the terms of this five- year agreement with Tennis Canada. Courses will begin in October 2021, with pilot sessions to be held in advance. Mark will work closely with Deanna Hanes, Pickleball Canada’s Vice-President of Sport Development and Competition to develop and roll out the program. With these two well qualified individuals working together, the emerging program is well positioned to provide excellent coaching for new and existing Canadian pickleball players for years to come.

“As one of the fastest growing sports worldwide, this collaborative agreement with Tennis Canada will only help the long-term development of pickleball in Canada”, said Karen Rust, President of Pickleball Canada. “We look forward to working with Tennis Canada to help build and strengthen both of these great sports in our country.”

“Our research clearly indicates that pickleball – while being a fast-growing, independent sport – can be part of the tennis pathway for life for some of the over three million frequent tennis players in Canada”, said Michael Downey, President and CEO of Tennis Canada. “These players include pickleball in their menu of recreation sports, so it makes sense that Tennis Canada assist an emerging sport that can be played on tennis courts and is included in the offering of many tennis clubs.”

Mark Renneson has built a strong reputation in the world of pickleball and pickleball coaching development. Through his business, Mark trains pickleball players and serves as a consultant to clubs and other pickleball organizations across North America. He is well known to pickleball fans in Canada and abroad and is a regular colour commentator at major pickleball tournaments.

Pickleball remains the fastest growing sport worldwide, with over 350,000 pickleball players across Canada. This number is expected to increase significantly in the coming years. As the number of players grows, so does the need for well-trained coaches. This agreement will allow Pickleball Canada to leverage Tennis Canada’s existing infrastructure and status with NCCP and the Coaching Association of Canada. 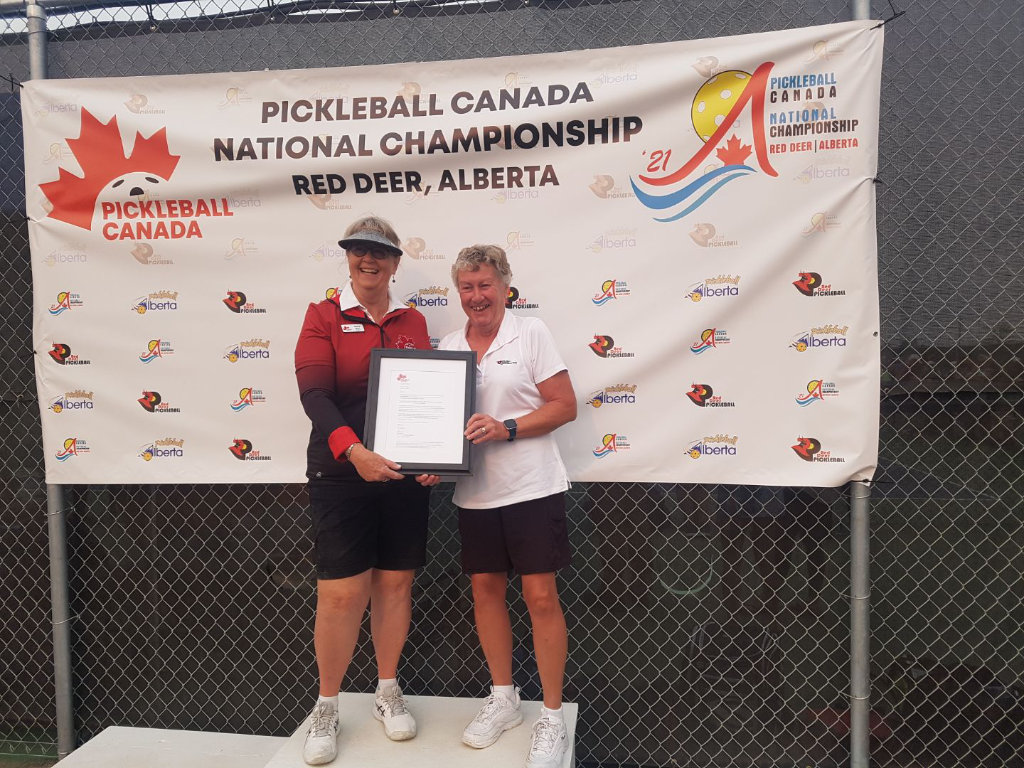 On Friday August 13, 2021, during the 2021 Pickleball Canada Nationals, President Karen Rust, on behalf of the Board of Directors of Pickleball Canada (and its 23,000 members) recognized Val Vollmin for her leadership in the development and growth of the sport in Canada. Through her vision, passion, spirit and tenacity, Val helped introduce pickleball to thousands of Canadians.

Val actively promoted the formation of Pickleball Alberta and also served as president of Pickleball Canada, as well as acting as an international ambassador for the sport. As president of the Red Deer Pickleball Club for five years, she delivered clinics in Ponoka, Drayton Valley and other central Alberta communities.

Remarkably, Val has been a pickleball leader and a feisty mover and shaker at four levels — local, provincial, national and global! Through her dedication and hard work, Val has played a big part in building the foundation for the growth and development of our sport.

Thank you, Val, for your outstanding contributions!

We invite all Pickleball players to join us on Saturday, August 14, 2021, to mark National Pickleball Day in Canada. This is a special day to celebrate our sport and players to continue to help the growth of Pickleball across Canada. There are many ways to mark the day, including holding fun tournaments; providing free lessons, holding skills competitions, and inviting friends and family to join in playing a game that is the fastest growing sport in North America.

Pickleball is the fastest growing sport in North America, with over 22,000 registered players in Canada.

Over the course of six days, the Championship will see more than 800 athletes compete in singles, doubles and mixed doubles in Open, Skill and Age-based categories. Competitors range in age from 10 to 80 and will come to Red Deer from all across Canada for the right to be crowned Canadian champions.

We know this is going to be an exciting event with top athletes such as Steve Deakin, Mark Renneson, Charles Neufeld, Karina Michaud Ernesto Fajardo, Cookie Drake, Paul Clemens, and Michael Botterill competing for top spots.

If you are not able to attend but are excited to see the results, please use the following link to Pickleball Brackets: https://pickleballbrackets.com/ptd.aspx?cpg=r&eid=e9cb2fe3-09ef-43bb-88f5-b0e696031f36 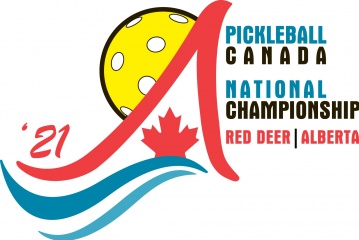 We are pleased to announce that the 2021 Pickleball Canada National Championship in Red Deer this August 10-15, is a GO!

Yes, you read that right, let’s play pickleball! Red Deer is gearing up for the finest championship ever and are very optimistic about the Open For Summer Plan.

We are closely monitoring the AHS updates in Alberta as well as in the USA, regarding the number of cases. History tells us that government health plans can change quite rapidly depending on case counts. Particularly after key holiday events.

Completing Your Registration and Payment

We are delaying payment collection for as long as possible. You have time to make your travel plans, and also weigh the potential risks. The Provincial travel restrictions, as well as isolation requirements are your responsibility. You may be required to provide proof of vaccination, or isolation either leaving your home or returning. You can confirm at the following link – Alberta AHS guidelines here.

More to do in Red Deer than Pickleball!

In the next few weeks we will be releasing more information on travel, accommodations, things to do, tours, and other events that may be of interest to you. Our concierge team has curated a number of activities and services to make your trip to Red Deer, Alberta an unforgettable experience! Explore Red Deer!

It’s worth repeating, the Nationals are contingent upon AHS provincial health measures and restrictions. You can follow AHS guidelines for further details here.