The Pickleball Canada team is growing!

We are seeking a part-time Communications Coordinator to develop and implement the organization’s communications plan. This role will mainly be remote and work 20 hours per week, reporting to the Executive Director. The ideal candidate has a strong knowledge of the sport of pickleball and pickleball in Canada, good interpersonal skills, and a positive attitude.

Please review the job description below for a full description of the Communication Coordinator’s roles, required skills, and commitment.

Apply in confidence by sending your cover letter and resume by February 12, 2023, to: HR@pickleballcanada.org.

Pickleball Canada is committed to creating an inclusive and diverse work environment and is proud to be an equal opportunity employer. All qualified applicants will receive consideration for employment without regard to race, ancestry, place of origin, colour, ethnic origin, citizenship, creed, sex, sexual orientation, age, marital status, family status or disability.

Pickleball Canada’s website has been refreshed just in time for 2023!

The website’s homepage has been redesigned to improve user experience and visual interest. Added features such as the image carousel with eye-catching graphics help visitors stay up to date on Pickleball Canada’s programs and events, with easy access to important news available through the News archives located below.

The most significant change is the new and improved page layout and main menu which have been designed with the user in mind. We have listened to our members and community to understand what information is most accessed and searched for. Pages are now easier to find, with the most visited pages made readily accessible in the main menu.

Take a look at the new design and let us know what you think!

If you are having trouble finding content you have previously visited or need assistance navigating the website, send us an email at info@pickleballcanada.org.

Over the course of five days, more than 500 players from across British Columbia, Alberta, Saskatchewan, and Manitoba are expected to compete for the coveted title of the Western Region’s best pickleball athletes in age categories ranging from 10 to 75+. Competition categories include men’s and women’s singles, men’s and women’s doubles, and mixed doubles. As a Pickleball Canada sanctioned tournament, current international rules will be in effect.

Peter Milovanovic, Pickleball Canada President, said “I am very pleased to see the Medicine Hat Pickleball Club host our Western Regional Championship. They have a terrific facility and enthusiastic group of dedicated volunteers ready to put on an excellent event. We thank them for taking on this opportunity”.

“The MHPC cannot wait to showcase our new 20-court facility, our city and our club members and our outstanding volunteers to the Western Canadian Pickleball community”’ states Brenda Lea MacPhail, Tournament Director. “Our past tournament successes have been noted by all that have attended over the years, and we hope to continue that legacy in 2023 making this event a very memorable one for all”, says MacPhail.

Located in the southeast corner of Alberta and nestled along the South Saskatchewan River, the City of Medicine Hat has a population of just over 63,000 but don’t let size fool you. It is a vibrant city full of arts, entertainment, recreation and leisure activities. To fully experience the sunshine, the coulees and the rolling prairies alike, you can hike or bike, the 155+ kilometers of the Heritage Trail Network.

For a fabulous overview of the MHPC facility, please click this link, and enjoy an overhead view. 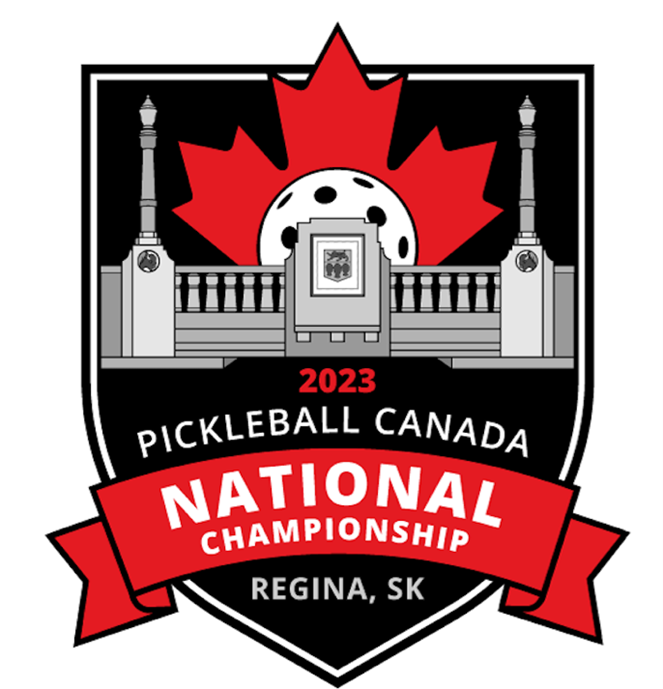 The official logo includes the Pickleball Canada logo and the Albert Street Memorial Bridge, an iconic symbol of Regina, built in the great depression to employ local workers. It symbolizes increasing connections, building bridges and stands as a world record holder as the longest span over the smallest body of water.

Pickleball Regina welcomes everyone to Regina for Nationals at the Viterra International Trade Centre and Queen City Pickleball Hub, with the expected number of athletes at 1,000, along with 300 volunteers.  For more information about Nationals, please go to Pickleball Brackets.

“I am honoured to be asked to serve our members. I am looking forward to working with our staff team, and with the tremendous volunteers on our Board, our Provinces and Territories and our clubs. Together we will continue to grow our sport across the country to make it truly a sport for All, for Life”, said new President Peter Milovanovic.

The role of Pickleball Canada’s Board of Directors is to provide overall strategic direction, leadership, and stability for the organization. The Board establishes the overall mission and purpose for the organization and is responsible for a number of key governance-related activities. These include approving the appointment of – and providing direction to – the senior leadership team as well as the development and adoption of organizational policies, financial oversight, and approval of the annual budget.

Pickleball remains the fastest growing sport worldwide, with over 1 million pickleball players across Canada, and over 43,000 Pickleball Canada members, and the number is expected to continue to significantly increase in the coming years. Pickleball Canada has national and regional pickleball championships and administers programs to promote and grow pickleball across the country. Pickleball Canada’s mandate and purpose is to develop and sustain a dynamic, integrated Canadian system that promotes participation, competition, and excellence in pickleball.

The 2022-2023 Pickleball Canada Board of Directors is as follows:

Over the course of five days, more than 1,000 players from across Canada are expected to compete for the coveted title of Canada’s best pickleball athletes in age categories ranging from 16 to 75. Competition categories include men’s and women’s singles, men’s and women’s doubles, and mixed doubles. As a Pickleball Canada sanctioned tournament, current international rules will be in effect.

“Pickleball Regina has earned a reputation as an enthusiastic, capable and welcoming host of competitions both large and small” said Deanna Christie, Vice President Sport for Pickleball Canada. “The club set a high bar by hosting the Western Regional Pickleball Championships, held in July, and we have no doubt that Regina will be able to deliver a successful Nationals”.

Randy Dove, the Chair of the Pickleball Regina Organizing Committee, said, “Pickleball Regina is excited to host the 2023 Pickleball Canada National Championship in August 2023. We have the skills, motivation, and confidence that we will provide an experience for athletes, volunteers and spectators that will raise the bar for hosting for the future. We look forward to working with Pickleball Canada and Pickleball Saskatchewan to ensure this is an outstanding event for everyone involved.”

Regina has a track record of being a very desirable destination to host world-class regional, national, and international events. The location provides for easy access by highway and air as well as first-rate accommodations and state of the art facilities. The community excels at delivering a welcoming spirit and warm prairie hospitality.

“We very much look forward to working with the Pickleball Regina host club to ensure the tournament is successful and provides a memorable experience for competitors, officials, volunteers, and spectators”, said Pickleball Canada Executive Director, Carla Anderson.

Pickleball is the fastest growing sport in North America, and over one million people play pickleball in Canada. That number continues to quickly rise as more are introduced to the sport that is easy to learn, yet a challenge to master.

Pickleball Canada (PCO) has reached a major milestone of 40,000 members!

Since this past January, when our membership was at 28,000, we’ve experienced a 43% increase to reach this 40,000-member milestone.

This could not have been achieved without the tireless efforts of present and past volunteers, such as Pickleball Canada presidents, board members, officials, and coaches who have all played key roles in developing the sport in Canada.

From the establishment of Pickleball Canada in 2011, many individuals have supported the organization in the role of President. To highlight the leaders from over the years, below are the Pickleball Canada Presidents in order of our incorporation to the present:

Pickleball Canada would also like to thank our Affiliated Provincial/Territorial Pickleball Associations (PTSOs) who are crucial in the development of the game, as well as our Affiliated Clubs for their ongoing efforts to bring pickleball to more and more Canadian communities.

And of course, we would like to thank each of our members for your participation in pickleball and for your trust in PCO and your PTSOs to provide the best quality pickleball possible. We are committed to growing the game safely, with our members at the centre of all we do.

We appreciate the time and commitment of all volunteers who have contributed to the advancement of pickleball for all, for life. 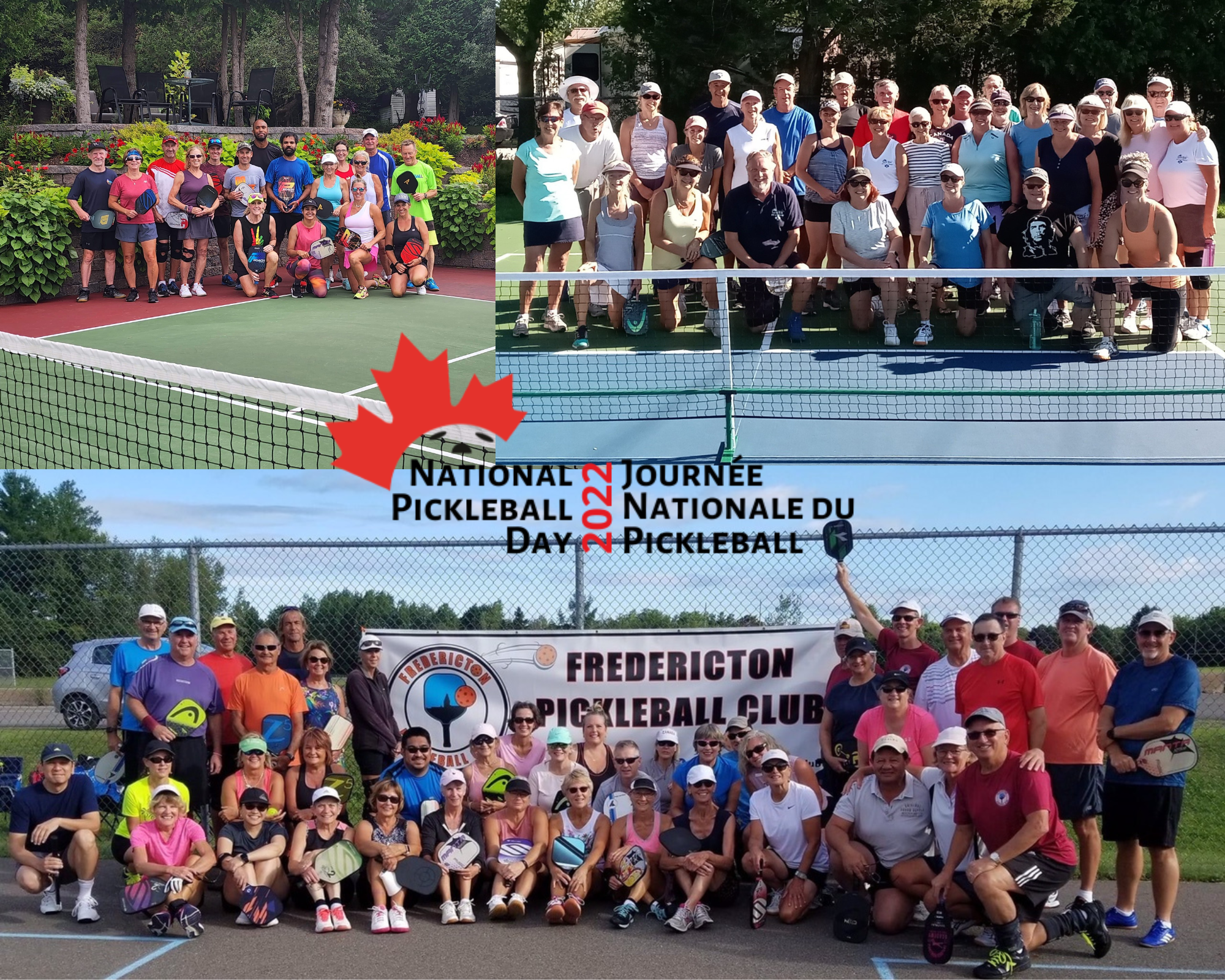 This year, National Pickleball Day was truly a national event, with players young, old, beginner, and advanced coming together to spend a day of fun on the courts. Pickleball Canada received submissions from members in eight provinces sharing their stories, pictures, and what pickleball means to them.

A few highlights of the stories received include:

As pickleball continues to see rapid growth throughout the country, Pickleball Canada continues to work to develop key programs and policies needed to advance the sport for all, for life.

Mark Saturday, August 12, 2023, on your calendars as National Pickleball Day 2023! We cannot wait to see the growth and development of pickleball from this year to next.

If you have additional stories from National Pickleball Day 2022 that you would like to share with us, please send it to Kaitlyn Green, Project Coordinator at Kaitlyn.green@pickleballcanada.org.

Officiating is an important component of pickleball and as the sport grows rapidly across Canada, we need more and more referees to officiate at tournaments all over the country. Referees ensure consistent application of the rules of pickleball and enhance the tournament experience for the players.

Refereeing is a great way to spread your love for pickleball, become an expert in the rules of the game, give back to your pickleball community, and travel to new destinations!

Officiating may be right for you if…

For more information, including the steps to become a referee, head to the Officiating page on the Pickleball Canada website.

Pickleball Canada is inviting all Pickleball players to join us on Saturday, August 13, 2022, to mark National Pickleball Day in Canada! This is a special day to showcase the sport we all love, and there are so many ways to celebrate. How about hosting a tournament, providing free lessons, holding skills competitions, or inviting friends and family to join you in a day of play. It just has to be Fun!

National Pickleball Day is an excellent opportunity to spread awareness of the sport and introduce the game to new players across the country. Show your friends and family why pickleball is the fastest growing sport in North America.

If you do take part in, or organize a National Pickleball Day event, make sure to tell us about it! We would love to share your stories with our members on our social media, website, and PC Scoop newsletter.

You can send your pictures, videos, and stories to Kaitlyn Green, Project Coordinator at kaitlyn.green@pickleballcanada.org.

Keep up with our National Pickleball Day celebrations, as well as other Pickleball Canada news on our Facebook, Instagram, and LinkedIn.