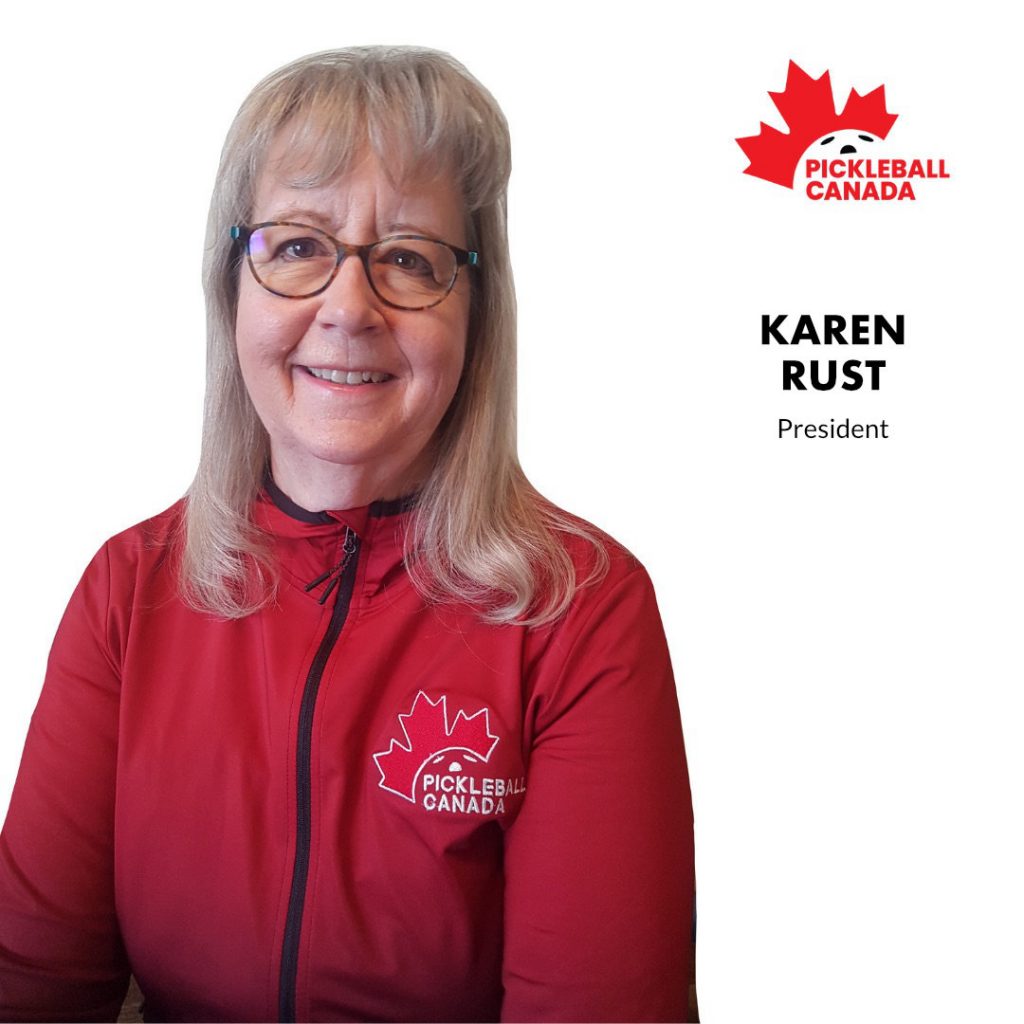 Meet Karen Rust from Saskatchewan. Karen joined Pickleball Canada in 2010 out of a desire to support and encourage the growth of pickleball both locally and nationally.

During ten winters spent as an Arizona snowbird, Karen learned to play pickleball, to organize programs, to run tournaments and to referee; achieving Certified Referee status in 2018.

The knowledge gained in Arizona was used to lead the founding of Pickleball Regina Inc. in 2017. Karen served as Tournament Director for the first Pickleball Saskatchewan Provincial Championship in 2017. Several additional tournaments have been held in Saskatchewan under her leadership. Karen is in her final year as Director and Past President of Pickleball Regina which now numbers 900 members and will host Pickleball Canada’s first Western Regional Championship in 2022.

Provincially, Karen has helped Pickleball Saskatchewan achieve emerging sport status for pickleball and led the creation of the province’s three year strategic plan. Karen also serves as Head Official for the province, training dozens of referees annually, and Director of Competition, supporting tournaments throughout the province.

Karen has been a member of Pickleball Canada’s National Officiating Committee since 2018, playing a lead role in the creation and updating of referee training material. She was appointed to the Pickleball Canada Board as the Prairies Director in November, 2020, elected as a Director at the May, 2021 Annual General Meeting, and at that time chosen to serve as an Officer in the roles of Vice-President Administration & Competitions and Treasurer. At the July 6, 2021 Pickleball Canada Board meeting, Karen was appointed to fill the vacant position of President.

Prior to retiring and becoming a full-time volunteer and part-time pickleball player, Karen worked in the financial services industry. She is a retired accountant, with senior management experience at the Co-operators Life Insurance Company where she held the position of Vice-President, Finance. Her volunteer and competition experience before committing to pickleball was primarily in the area of dog sports. Karen, her husband Fran and four-legged family members participated in agility and flyball competitions all over Canada and the United States for many years.

What Karen loves most about pickleball, is the inclusivity of the sport. There is a place for all types of athletes to participate at a level they feel comfortable, where they can enjoy the social aspects of gathering with others as well as improve their fitness. There is also an opportunity for more competitive athletes to challenge themselves to achieve higher and higher goals. She looks forward to seeing the continued growth and recognition of pickleball as a sport in Canada and internationally.